What a great turnout we had at the three final games. Congratulations to all the winners this year.  All players had a great season and we are all looking forward to next year.

In the Green Division, Tom O’Malley’s Legends, defeated Earl Sisson’s Pioneers by a score of 6 to 3.  The Pioneers scored first with a pair of runs, but the Legends answered and then went ahead for good.  Congratulations to both teams. 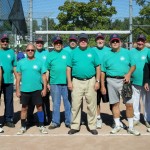 The Pioneers, runners up in the Green Division. 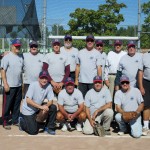 The Legends, 2014 winners in the Green Division.

In the Blue Division Jim Miller’s Gladiators defeated Len Dupuis’ Ancients quite handily.  The final score was 15 to 5. 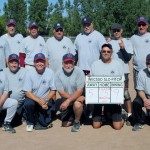 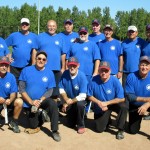 In the Red Division, the Vikings played the Cavemen.  After losing on Monday, the Cavemen were in a do or die situation.  They had to win the first game to force a second and deciding game.  Unfortunately they came up just a little short and the Vikings were victorious. 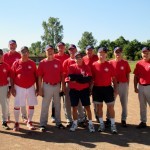 The Cavemen, 2nd in the Red Division 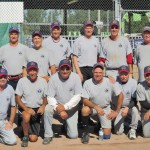