The success of the event is only possible with the generous support from our Sponsors, Committee Members and YOU the Bowlers.

THANK ALL OF YOU.

On behalf of Tom and myself we want to thank all of our “working committee” for a job well done.

Also several other people offered to give up bowling in order to help, but although we did not require their help we certainly do appreciate their offer.  All of the committee members solicited and in most cases bought door prizes to donate as well as worked the 2 raffles and purchased tickets,“ What a Group”. Thanks on behalf of Tom and myself.

Pictured below is Randy Soulliere, owner and General Manager of Platinum Tool and Engineering presenting Marg Cartier with a donation of $250.00. 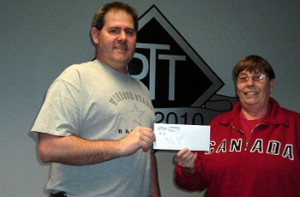 Special thanks, goes out to Wayne Weatherbie of Rev’s Bowlero for helping out and donating prizes and to Gary Hooper for making all the changes with the bowling assignments. Also thank you to Dan Batson of the Moose Lodge, not only has he kept his costs “LOW” for us; Dan donated door prizes (8) plus he paid for the committee’s dinners and bought us all a drink. Dan knows the work involved in fundraising, the committee says, “thank you Dan.” Another thank you goes out to Mark at Zehr’s Photo Lab for the donation of Printing the Pictures for us. 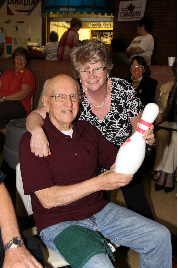 We had a special presentation for one of our fellow “Left Handers”, Max Krutsch. Pictured is Pat Berglund giving Max a bowling pin representing his 7 pins he claims he leaves.  Also Max received a plaque showing his two 300 Games. His last one when he was 74 years young with a 3 game total of 786. Not too bad for a senior. It was a surprise and we got a tear or two from him. Some said it could not be done. Thanks Mary and Sue Krutsch for making the presentation possible.

The WECSSO Charity Committee chaired by Brian Adlam, announced which organizations are receiving a donation from the fundraising efforts. All of these groups are from Windsor and Essex County and are Youth Oriented, support Youth activities and support Special Needs Programs; which meets the mandates set out by WECSSO.  After much consideration the donations are going to the following:

WECSSO also provides funding for a foster child program. Thanks Brian and your committee, well done.

That’s why we work 6 months raising funds for this Charity Event. Every penny is awarded to a needy organization to help out our YOUTH.

We have several people and Companies to thank for their generous Donations.

As we wrapped the raffles we held what we call a 50/50 draw, with total intake of $1150.00, so we made a management decision to have 3 draws instead of one, to spread out the proceeds. The winners were: 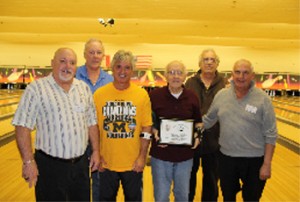 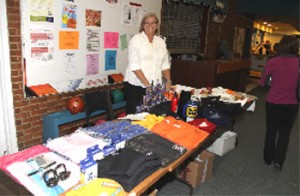 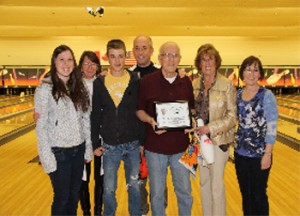 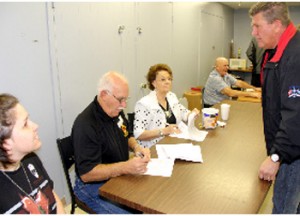