Green Division: Congratulations to Legends team who defeated the Archaics 22-9  for the Green Division Title. 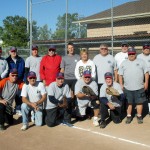 Blue Division: The Fossils won the final game over the Norsemen, 12 – 10 . The game was very close as the score indicates. Players on both teams knew it was going to be a close game as both teams finished the round robin 7- 3 and played very close all year. The Norsemen got off to an excellent start sending 7 batters to the plate and scoring 5 runs in the top of the first. Key at bats were delivered by Randy Chedour, and Paul Hager to bring in the 4th and 5th runs. The Norsemen kept the Fossils off the board allowing only one hit in the bottom of the inning. The Fossils were able to come back in the bottom of the 2nd scoring 4 runs on 6 hits with Don Renaud delivering a key to bring in the 4th run. We had a ball game. Score 5 – 4. Both teams were held off the board in the 3rd

In the 4th, the Norsemen strengthened their lead, soring 4 runs to post a score of  9 – 4, but the Fossils answered that in the bottom half with 5 runs of their own to tie the score at 9 – 9 The game remained tied until the bottom of the 6th; the Fossils having 2 men on and 2 out, Gary Maisonville hit a 3 run homer, deep into right field to put the Fossils ahead for the first time in the game at 12 – 9. The Norsemen threatened to score in the 7th with bases loaded and one out, but a key defensive play at home plate by Sil Pupulin  and Stan Roberts forced a man out and the next batter hit in to a fielders choice. The Norsemen scored one more in the 8th following a very close play at home plate where Stan Roberts once again snagged one out of the dirt to force an out at home.

It was an excellent game enjoyed by all. The players thank the umpires, Ron Ottogalli and Terry Hicks for a well called game and to the guys and girls that came out to the game to support both teams in their run for the win. 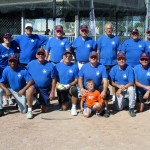 Red Division: The Vikings defeated the Leisures 17-10 to claim the Red Division championship.  The game was much closer than the score would indicate.  The score was 12-10 going into the top of the ninth.  In the ninth, the Vikings scored five runs and that pretty well decided the game.  The Leisures could not muster any offence in their ninth.  Both teams played very well both offensively and defensively.  The Vikings had a slight edge in both areas.  There were many very good defensive outfield plays made by both teams.  Probably the biggest one occurred in the bottom of the 8th  with the score 12-10 for the Vikings.  Jeff Creighton hit a long drive to left center and Lou Lafontaine made an outstanding catch for the third out.  If the ball got by Lou, at least one and maybe two runs may have scored on the play. Ken Chisolm  contributed two hits in key situations to bat in some very important runs. 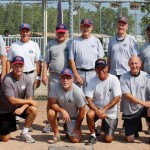 Congratulations to all teams that participated in the Summer Slo-Pitch League. The camaraderie, exercise and fun that everyone experiences makes it a great time for all, no matter who wins.